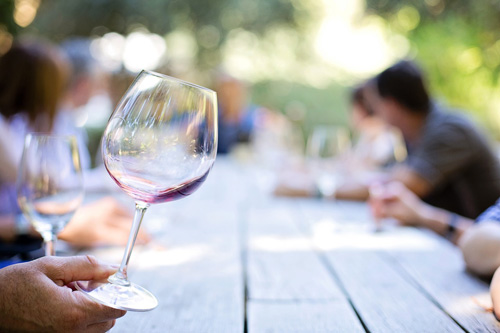 “Welcome to the land of Nero d’Avola, lemon and almond. The land that turns the sun’s rays in aromas and flavors. ”

Avola stretches along the coast, in the territory south of Siracusa, along one of the oldest routes Greeks of Sicily: the way Elorina. The area where is located is a great container of cultural and environmental heritage and of them Avola is the “door”. From the big Piazza Umberto I°, Piazza Maggiore of centre hexagonal historic, begin the “streets” Baroque and leads to the spectacular nature reserve of Cava Grande del Cassibile and Vendicari.
The flat site of the town of Avola is placed in an extraordinary landscape as between the Ionian Sea and the mountains Iblei, in a coast with beaches of warm golden sand, and air cool. This microclimate allowed the cultivation of sugar cane, vines, almond and lemon whose fruits continue, even today, to provide high excellence. Avola has joined its name to agricultural products of world renown such as almond or “Pizzuta of Avola”, the wine called “Nero d’Avola” and the lemon “Femminello Syracuse.” The Almond Avola, with perfect oval, as Leonardo Sciascia wrote, and Nero d’Avola, are famous worldwide for their distinctive flavors.

The main feature of the avolese coast is the “Rotonda sul Mare”, a place of great tourist attraction in which are held evenings of music and entertainment full of fun. 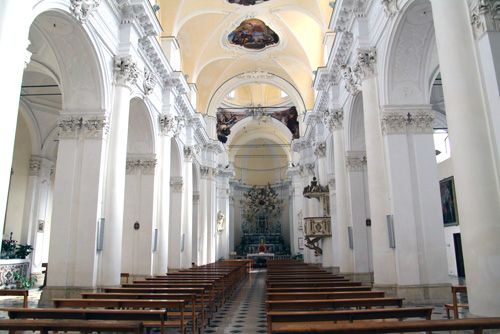 In a region with an abundance of olive and almond trees, Noto is a small baroque jewel perched on a plateau overlooking the Asinaro valley.
Her beauty, so harmonious to seem a fiction, the scene of a theater, was born from a tragic event: the earthquake of 1693, which in this part of Sicily brought death, destruction, but gave impetus to reconstruction. Before of earthquake the city was to 10 km away.
Extremely ancient origins, Noto gave birth to Ducezio, who in the fifth century. B.C. He shook the Greeks for having angered the Sicilians against them.
The 1693 earthquake destroyed the city completely. For the reconstruction is chosen a place less steep and broader, allowing the construction of a city simple, linear, with intersections at right angles and parallel roads and wide as it wants the new baroque style.
Three main roads running from east to west and three walks of life who are established: the first road, highest, is destined for nobility, the central road for clergy (the only exception is the secular building of ‘Landolina’) The buildings are magnificent, all built in the local limestone, tender and compact. To this reconstruction, led by the Duke of Camastra, representative of the Spanish viceroy in Noto, participate in many Sicilian artists, including Paul Labisi Vincenzo Sinatra and Rosario Gagliardi, who, influenced by Borromini, is perhaps one of the most inventive.
The city is built as if it were a stage, studying the perspective in a unique way, playing with the lines and curves of the facades with decorations of shelves, curls and spirals, the gargoyles, cherubs, the balconies wrought iron railings, which folds in graceful shapes and bulging. 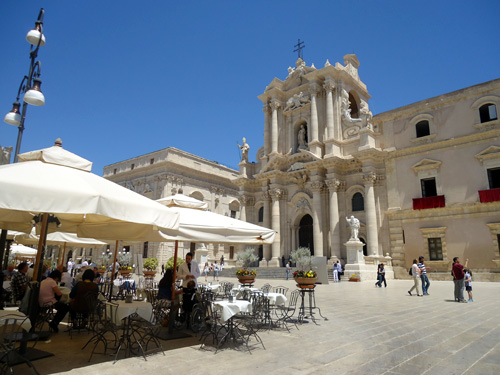 The city of Syracuse is developed in part on the promontory of Ortigia island and partly on land. The shape of the coastline determines the wide bay of Porto Grande.
Its geological aspect is included in ‘Area Iblea'; this area is a structure that is part of the northern foothills emerged from the African Plate, which has in the Mediterranean, and then in Sicily, his point of confrontation with the European plate. But this area has another peculiarity, in fact geophysical researchers found that in the Monti Iblei has formed a separate plate, called “micro-plate Sicilian-iblea”, it is part of the African plate but has a peculiar dynamics, includes much of Sicily and the surrounding seas and is the responsible of the strongest earthquakes occurred in the eastern part of the island. The Iblei Mountains are composed of white limestone rocks conchiglifere, more precisely from carbonate rock originated from marine sediments deposited in the Miocene; In fact the area where now stands Syracuse, was once submerged by the waters, and are proof of the many fossils of shells visible on the surrounding rocks.
Its mountain ranges are not very large, because the city is located near the coast; There are mostly hills, whose highest peak is Mount Epipoli. Near Cassibile, instead there is a large canyon, which has been carved over the centuries by the Anapo river.
The Anapo is one of the rivers of Syracuse, which runs for forty kilometers, and has a mainly torrential character; then there is the Cyane river, short stream that flows into the Great Harbour, where it joins with the Anapo; is a perennial river fed even in summer. Another river is to Cassibile, thirty kilometers long, it runs between the towns of Avola and Palazzolo Acreide, resulting then in the Ionian Sea. The artificial canals that cross Syracuse are: Mammaiàbica Pismotta and Regina. The lakes and small waterfalls are located in Cava Grande del Cassibile. In the city there is a source of fresh water, the renowned Fountain of Arethusa, and an artificial cave, called Cave of the Nymph, from which flows the water that comes from the aqueduct Galermi. Syracuse faces the Mediterranean Sea, the Ionian Sea basin.
Its coasts are mainly formed by rocks, but there are also wide sandy beaches.
Municipalities with whom borders are: north with Priolo Gargallo and Garden City (fraction of Melilli), west Solarino, Floridia, Palazzolo Acreide, Noto and Canicattini Bagni and south by Noto and Avola. The territorial boundaries are bordered to the north by the district Targia; West from Belvedere, panoramic outpost; south and from Cassibile Fontane Bianche. 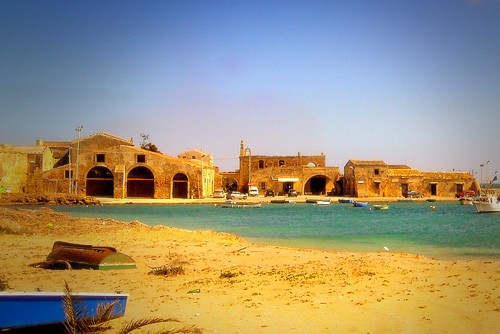